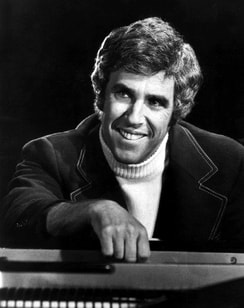 Burt Bacharach
Burt Bacharach (born May 12, 1928) is an American composer, pianist, record producer, and concert performer who composed popular songs from the late 1950s through the 1980s.  Most of his songs were written with his two main lyricist collaborators Hal David (1960’s) and Carole Bayer Sager (1980’s), and some songs were written for the stage and screen.  Bacharach's songs have been recorded by hundreds of artists, and 27 of the recordings became US Pop Chart Top Ten hits (6 of them reaching #1).  He was nominated for many Grammy awards (winning 6), Academy Awards (winning 3), and Tony Awards.  In 2001 he was awarded the international Polar Music Prize, in 2002 the National Academy of Recording Arts and Sciences (NARAS) New York Heroes Award, in 2008 a Grammy Lifetime Achievement Award, in 2009 an honorary Doctor of Music from Berklee College of Music, and in 2012 the coveted US Library of Congress Gershwin Prize.
​
Burt Bacharach was born in Kansas City, Missouri, and grew up in New York City, learning piano early on and frequenting many jazz clubs in Manhattan.  He obtained a Bachelor of Music in 1948 at Montreal's McGill University, and studied music at the Mannes School of Music in New York City and the Music Academy of the West in Montecito, California.  In the 1950’s Bacharach was a pianist and conductor for singers Vic Damone, Polly Bergen, Steve Lawrence, the Ames Brothers and Paula Stewart (his 1st wife). In 1956, he became part-time music director for Marlene Dietrich, touring worldwide, and in 1957 he met lyricist Hal David, writing their first hit together, “Magic Moments” sung by Perry Como.  During this time period he gained his first major recognition as a conductor and arranger while developing his own music composing style, writing several songs which appeared on the pop charts.

Burt Bacharach and Hal David began a full-time partnership in 1962, and over the next 10 years wrote over a hundred songs together, many sung by the vocalist Dionne Warwick.  The Bacharach composing style consisted of unusual chord progressions, striking syncopated rhythmic patterns, irregular phrasing, frequent modulation, and odd changing meters.  His off-beat time signature bars would appear seemingly out of nowhere but, like a classical work, perfectly placed in the score resulting in an innovative sound and a challenge for singers.  Bacharach eventually arranged, conducted, and produced much of his recorded output using instruments including flugelhorns, bossa nova sidesticks, breezy flutes, strings, cooing female voices, and harmonica all of which became known as the "Bacharach Sound”.  Bacharach and David wrote for the stage and screen productions The Man Who Shot Liberty Valance, What’s New Pussycat, Alfie, Casino Royale, Promises Promises, and Butch Cassidy and the Sundance Kid.  Their #1 US Pop Chart hits were “(They Long To Be) Close To You” written in 1963, “This Guy’s In Love With You” written in 1968, and “Raindrops Keep Fallin’ On My Head” written in 1969.

In 1973, Bacharach and David wrote the score for a musical remake of the 1937 film Lost Horizon.  The result was a critical and commercial disaster and marked the end of the Bacharach-David partnership.  Bacharach went on a concert tour performing his songs and in the 1980s started writing songs with lyricist Carole Bayer Sager (his 3rd wife).  They wrote dozens of songs together including the #1 US Pop Chart hits "Arthur's Theme (Best That You Can Do)" from the film Arthur 1981, "That's What Friends Are For” 1982, and “On My Own" 1985.

*Written For Stage and Screen productions