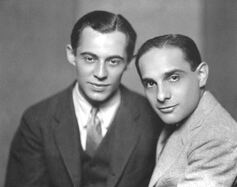 Richard Rodgers - Lorenz Hart
The legendary Broadway team of Rodgers and Hart consisted of the composer Richard Rodgers (1902-1979) and the lyricist Lorenz Hart (1895-1943).  They worked together from 1920 to 1942 on Broadway and in Hollywood for 39 musical productions. By using Mark Twain, William Shakespeare, and current events as sources, they raised the musical form standard to levels not seen before.  They also produced more American song standards than any other musical songwriting team in history, and composed New York City's first major theme song:  the 1925 song "Manhattan".

Richard Rodgers is one of only two people in history to have won all five major awards:  an Oscar, Grammy, Emmy, Tony, and Pulitzer Prize (the other is Marvin Hamlisch).  Rodgers had three significant periods in his incredible 60 years of composing:  the Rodgers and Hart period (1920-1942), the Rodgers and Hammerstein period (1943-1959), and the Rodgers Independent period (1960-1979).  As a creator of popular melodies, he ranks high above any other composer of musicals, having created over twice as many song standards many of which are routinely played today.   Richard Rodgers was formally trained and attended Columbia University and the Institute of Musical Art (now the Juilliard School). His musical composition "shows the highest degree of consistent excellence, inventiveness, and sophistication", and his waltzes are given an ultimate compliment, being known simply as "Richard Rodgers Waltzes".   In addition to his song standards, he composed the highly acclaimed symphonic pieces "Slaughter on Tenth Avenue" (1936) and "Victory at Sea" (1951).  ​In 1978 the Richard Rodgers Award was created for the development of musical theater.  In 1990 the 46th Street Theater was renamed The Richard Rodgers Theater.

Lorenz Hart was born in New York and attended Columbia University School of Journalism.  By 1918, Hart was working for the Shubert brothers, partners in theatre, translating German plays into English.  He began collaborating with Richard Rodgers in 1919 and remained with him until Hart's untimely death in 1943.  Quoting from reviews, "Lorenz Hart's lyrics, facile, vernacular, dazzling, sometimes playful, sometimes melancholic, raised the standard for Broadway songwriting. They showed greater sophistication in subject matter, more use of overt verbal cleverness, and more of a New York or Broadway sensibility than any other lyricist of the day."

Rodgers and Hart met in 1919 when asked to write an amateur club show together.  Richard Rodgers was deeply impressed by Lorenz Hart's seriousness and profound knowledge in every aspect of lyric-writing.  Over their 22 years together they wrote for 32 Broadway musicals in Manhattan and 7 films in Hollywood.  They always composed together with Rodgers sitting at a piano listening to Hart’s wordsmith phrases.

A Connecticut Yankee (1927) was based on Mark Twain's novel and produced the song standard "My Heart Stood Still".  The film Love Me Tonight (1932) produced the songs "Isn't It Romantic" and "Lover".   The innovative stage musical Jumbo (1935) produced the standard "My Romance".  The 1937 musical Babes In Arms produced the standards "The Lady is a Tramp", "My Funny Valentine", and "Where or When".  The Boys From Syracuse (1938) was based on William Shakespeare's The Comedy of Errors and produced "Falling In Love With Love".  ​The 1939 musical Too Many Girls produced the song "I Didn't Know what Time It Was" and presented the debut of Desi Arnaz on the musical stage as well as in films a year later where he met Lucille Ball.   ​The 1940 musical, Pal Joey, which is considered the Rodgers and Hart Masterpiece, produced the song standard "Bewitched" and was made into an award-winning film starring Frank Sinatra.  The Rodgers and Hart collaboration ended in 1943 with the premature death of Lorenz Hart, and the legendary team of Rodgers and Hammerstein was born.