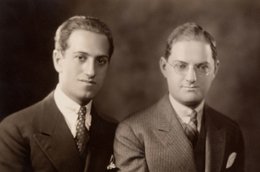 George Gershwin - Ira Gershwin
George Gershwin (1898-1937) was an American composer and pianist who composed music for 18 stage and screen Musicals with his lyricist brother Ira Gershwin (1896-1983).  They collaborated from 1921 until George’s premature death in 1937 and were responsible for the award-winning musicals Porgy and Bess, Of Thee I Sing,  and  Girl Crazy among others.  To honor the Gershwin brothers' contributions to musical theater, the Gershwin Theater opened on Broadway in 1972 and is devoted to showing the top musicals of the day.  In 1985 George and Ira Gershwin joined a select group of only three other songwriters to be awarded the Congressional Gold Medal.  In 2007, the Library of Congress created The Gershwin Prize, named after George and Ira, to recognize the profound and positive effect of popular music on culture.

George Gershwin started his piano playing on the piano his parents bought for his older brother Ira.  Recognizing George's talents, his parents hired the symphony pianist Charles Hambitzer to teach him music composition and piano, and the result was astonishing.  During the ten years after high school George was a staff pianist and song plugger for Jerome H. Remick and a rehearsal pianist for Dillingham-Ziegfeld, played concerts at Aeolian Hall producing around 130 piano rolls, published his first national hit “Swanee” with the lyricist Irving Caesar, wrote songs yearly for the George White Scandals, went under contract with Max Dreyfus producers, produced his first Broadway songs with William Daly and Buddy DeSylva, and in 1924 wrote the famous jazz symphony "Rhapsody In Blue”.  Ira Gershwin, using the pseudonym Arthur Frances (his two other siblings' names), began writing lyrics for composers such as Vincent Youmans, and in 1921 collaborated with his brother George on  the score for the musical  A Dangerous Maid.  In 1924 Ira became involved with George full time under his own name and collaborated with him until George's untimely death in 1937.

From 1924-1933, George and Ira Gershwin wrote 13 Broadway musicals producing numerous song standards such as "Someone To Watch Over Me" and “But Not For Me" which brought them to the forefront as popular songwriters.  During his collaboration with Ira, George Gershwin found time to compose his six complex classical works "Rhapsody In Blue” 1924, "Concerto In F" 1925, “Three Preludes For Piano" 1926, “An American In Paris” 1928, “Second Rhapsody” 1931, and “Cuban Overture” 1932. In 1935, George and Ira, along with the author Dubose Heyward, wrote the folk/jazz opera Porgy and Bess which is considered a groundbreaking classic unveiling the harsh realities of segregation. Porgy and Bess produced many hit songs including  "It Ain't Necessarily So" and "Summertime".

After Porgy and Bess, George and Ira moved to Hollywood to compose for film and got an Oscar nomination for best song "They Can't Take That Away from Me”. In 1937 while writing music for their third film, George was stricken with a brain tumor and died quite unexpectedly shortly after surgery at the age of 38.  After George Gershwin’s untimely death, Ira continued to work with the composer giants Kurt Weill, Jerome Kern, Harold Arlen, and Arthur Schwartz until 1946 in theater, and until 1954 in film.  He spent the rest of his life working on the Gershwin family archives.
​
In 1945 the Hollywood film Rhapsody In Blue about George Gershwin’s life starred Robert Alda as George Gershwin and Herbert Rudley as Ira.  In 1951 many of George and Ira's songs and George's classical symphonies were featured in the Hollywood film An American In Paris which won six Academy Awards including Best Picture and Best Musical Score.  In 1959 Ira Gershwin published his book Lyrics on Several Occasions which contained many anecdotes about the Gershwin brothers' collaboration.  In 2012 the pianist Michael Feinstein published the book The Gershwins and Me about his collaboration with Ira on the Gershwin archives.  In 2015 the film An American In Paris was made into a Broadway Musical and received 12 Tony Award nominations including Best Musical.

The 18 Musicals of George and Ira Gershwin are