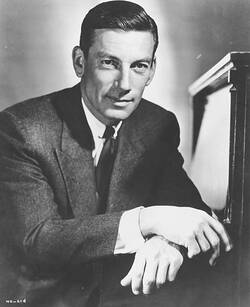 Hoagy Carmichael
Hoagy Carmichael (1899-1981) was an American pianist, singer, actor, and composer who wrote many acclaimed popular song standards in the 1930's and 1940's.  His first song standard "Star Dust" (1929) was the most requested song of the mid 20th century and his last popular song won the Oscar for best original song in 1951.  He was one of the initial inductees into the Songwriters Hall of Fame in 1971,  received an honorary Doctorate of Music from his hometown university, Indiana University, and was honored at the 1979 Newport Jazz festival with an 80th birthday concert entitled: "The Stardust Road:  A Hoagy Carmichael Jubilee".  As an actor he appeared in several Hollywood films and television productions playing the part of "Cricket" in the Bogart and Bacall classic To Have and Have Not and the saloon piano player Butch Engle in the classic film Best Years of our Lives ​playing and singing his own compositions in each.

​Born Hoagland Howard Carmichael in Bloomington, Indiana, Hoagy Carmichael grew up influenced by his talented pianist mother who played everything from the classics to ragtime, and sustained the family when times were hard.  Learning piano as a young boy, Carmichael was playing by ear as a teenager and formed his own jazz band after entering Indiana University at the late age of 20.    Playing for a small Jazz group called the Wolverines which included the famed cornetist Bix Beiderbecke, Carmichael wrote his first recorded song, "Riverboat Shuffle", and the beginnings of a melody which would eventually become his most popular song, "Star Dust".

After graduating from the university, Hoagy Carmichael went to law school earning a Juris Doctorate, and became a practicing lawyer in West Palm Beach, Florida, disdaining his music.  One day he happened to hear his own song "Riverboat Shuffle" on the radio played by the jazz greats.  This event jarred him loose from the law profession forever, and he returned to his music, finally completing the music for "Star Dust".  He then moved to New York where the lyricist Mitchell Parish finalized the "Star Dust" lyrics in 1929.  The popularity of this song enabled him to play and sing with the top jazz orchestras in the business, and for the next five years he wrote great songs with lyricists such as Johnny Mercer and Mitchell Parish, producing such standards as "Georgia On My Mind", "Lazy River", “Little Old Lady” (written for his mother), and the delightful “One Morning in May”

After obtaining a contract with Paramount pictures, he and his new wife moved to Hollywood in 1936 where he continued writing great song standards such as "The Nearness of You", "Heart and Soul", and “Two Sleepy People” with other lyricists such as Frank Loesser and Ned Washington. He finished the 1930s with the standards “I Get Along Without You Very Well” (based on a poem by J.B. Thompson), and, using his own lyrics, “Blue Orchids”.  In the 1940s he chanced into a minor role for a film, singing his own music, and then started appearing in movies more frequently, culminating in his appearance with Bogart and Bacall in To Have and Have Not in 1944 and Best Years if our Lives in 1946.  Soon thereafter he again collaborated with Johnny Mercer and composed his last popular song "In the Cool, Cool, Cool of the Evening" sung by Bing Crosby in the 1951 film Here Comes the Groom and winning the Academy Award for best original song.  At this point he found there was little interest in his style of music (rock and roll was making the scene) and ended his composing career.  He spent his remaining years hosting radio shows and playing piano as a guest artist at various Hollywood establishments.

Hoagy Carmichael wrote two autobiographies, The Stardust Road (1946) and Sometimes I Wonder (1965).   He estimated that he had written several hundred songs and had 50 hits in his songwriting career.   His best known songs, "Star Dust", "The Nearness of You", "Lazy River", "Georgia on my Mind", and "Heart and Soul",  are American classics and will be sung and played for years to come.