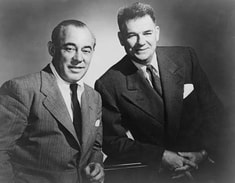 Richard Rodgers is one of only two people in history to have won all five major awards:  an Oscar, Grammy, Emmy, Tony, and Pulitzer Prize (the other is Marvin Hamlisch).  Rodgers had three significant periods in his incredible 60 years of composing:  the Rodgers and Hart period (1920-1942), the Rodgers and Hammerstein period (1943-1959), and the Rodgers Independent period (1960-1979).  As a creator of popular melodies, he ranks high above any other composer of musicals, having created over twice as many song standards many of which are routinely played today.   Richard Rodgers was formally trained and attended Columbia University and the Institute of Musical Art (now the Juilliard School). His musical composition "shows the highest degree of consistent excellence, inventiveness, and sophistication", and his waltzes are given an ultimate compliment, being known simply as "Richard Rodgers Waltzes".   In addition to his song standards, he composed the highly acclaimed symphonic pieces "Slaughter on Tenth Avenue" (1936) and "Victory at Sea" (1951).  ​In 1978 the Richard Rodgers Award was created for the development of musical theater.

The Pulitzer Prize winning author, Oscar Hammerstein II is considered one of the most important figures in the history of American musical theater and is considered one of the best Broadway book writers of all time.  Hammerstein grew up in a New York City theatrical family and graduated from Columbia University in 1915.  He started law school but left after a year to pursue a theater career, and for 25 years collaborated with the composers Rudolf Friml, Herbert Stothart, Vincent Youmans, Sigmund Romberg, Georges Bizet, and Jerome Kern writing books and lyrics to stage musicals such as  Music In The Air, Carmen Jones, Sunny, Rose Marie, The Desert Song, Wildflower, and Show Boat.  The Hammerstein and Kern 1927 musical Show Boat was a key turning point in the history of American musical theater making the story, not the stars, the central focus of the production and bringing musical theater to full maturity as an art form, qualities Hammerstein continued during his final years of collaboration with Richard Rodgers.

The Rodgers and Hammerstein collaboration started in the early 1940’s when Rodgers decided to make a musical out of Lynn Riggs' stage play Green Grow the Lilacs.  His life long partner Lorenz Hart was unable to work on this, so he called on his old friend Oscar Hammerstein II who agreed to do the project, and the result became the legendary 1943 musical Oklahoma, which opened with the inspired Hammerstein lyrics: “There’s a bright golden haze on the meadow”.  During their seventeen-year collaboration, Hammerstein would create a brilliant set of lyrics for a "perfect" spot in the play.  He would send a neatly typed copy to Rodgers who would proceed to write the "perfect" melody to those brilliant words. While Rodgers and Hammerstein's plays contain some of the happiest, cheerful, and most uplifting songs in American culture, ("Oh, What A Beautiful Mornin'", "People Will Say We're In Love", "If I Loved You", "June is Bustin' Out All Over", "It Might As Well Be Spring", "Some Enchanted Evening", "Hello Young Lovers", "Something Wonderful", "A Wonderful Guy", "Climb Every Mountain", "The Sound of Music"),  the higher purpose in many of their works addressed the important social issues of the day: racism (South Pacific),  sexism (Oklahoma), classism (The King and I), domestic violence (Carousel) , fascism (The Sound of Music), and immigration (Flower Drum Song)  to name a few.  Many of their plays were made into award winning films producing 15 Academy Awards. Their musical Cinderella was the first musical written and produced solely for television and produced the popular songs "Ten Minutes Ago" and "Do I Love You Because You're Beautiful".

In 1949 Oscar Hammerstein II published his autobiographical book Lyrics which includes many stories about writing lyrics for his major musicals.  Upon his death in 1960, 9 months after the team's final musical, The Sound of Music, all lights in the Broadway theater district were turned off for one minute in his honor.

After 1960, Richard Rodgers composed five more Broadway Musical scores, one using his own lyrics (No Strings, 1962), and four with lyrics by the Musical Theater giants Stephen Sondheim (Do I Hear a Waltz, 1965), Martin Charnin (Two by Two, 1970 and I Remember Mama, 1979),  and Sheldon Harnick (Rex, 1976).  In 1975 Richard Rodgers published his autobiography Musical Stages.  Upon Richard Rodgers' death in 1979, all marquis lights in every theater on Broadway were turned off for one hour in his honor.
​
Rodgers and Hammerstein’s eleven musicals were
​