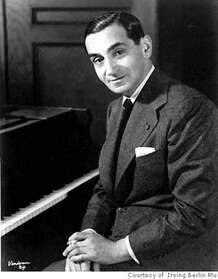 Irving Berlin
Irving Berlin  (1888-1989) was one of America’s legendary musical, holiday, and patriotic songwriters, having written such classics as "White Christmas", "Easter Parade", "Happy Holiday" and "God Bless America".  He composed the music and lyrics for 29 stage and screen musicals, garnering 8 Academy Award nominations, a Best Song Oscar for "White Christmas", and a Tony Award for best musical score in 1951.  He was also awarded an Army Medal of Merit by President Harry S. Truman in 1945, a Congressional Gold medal by President Dwight D. Eisenhower in 1954, and the Presidential Medal of Freedom by President Gerald Ford in 1977.  He was inducted into the Songwriters and American Theater Halls of fame.  To quote the legendary composer Jerome Kern, “Irving Berlin has no place in American music, he IS American music.”

Irving Berlin was born Israel Beilin in Russia and emigrated to the U.S. with his family at the age of five.   He had to go to work at a young age to help provide for the family by selling newspapers and singing songs for coins, and eventually working as a singing waiter at the Pelham Cafe in Chinatown at the age of 18.  There he sang made-up "blue" parodies of hit songs of the day to the delight of customers, taught himself to play the piano, and wrote his first song for which a printing error gave him the name “Irving Berlin"  (which he kept). In 1909 Berlin got a job as a staff lyricist with the Ted Snyder Company, and, in 1911, wrote his first hit song, "Alexander's Ragtime Band".  This worldwide phenomenon gave him instant fame and led to a 6 decade music career during which he wrote more than 1000 songs, being one of a select group of composers who wrote both the music and lyrics.   When asked about his method of songwriting, Berlin replied, “Usually I compose my tunes and then fit words to them, though sometimes it's the other way about.  It's the lyric that makes a song a hit, although the tune, of course, is what makes it last".

After writing for Revues and Follies, and contributing to Broadway shows with songs such as "Blue Skies", Berlin began a long career composing for film resulting in the songs "What'll I Do", "How Deep Is The Ocean", "Cheek To Cheek", "I've Got My Love To Keep Me Warm", "White Christmas" and "Easter Parade" sung by performers such as Kate Smith, Ginger Rogers, Fred Astaire, Al Jolson, Bing Crosby, Judy Garland, and Alice Faye to name a few.  In the late 1930's, Kate Smith Was looking for a patriotic song for the 1938 Armistice Day Radio Broadcast.  Berlin looked in his trunk and pulled out a song he had written years earlier called “God Bless America”.  When Kate Smith introduced this immortal song to a national radio audience, history was made.  In 1945 Irving Berlin was asked to step in at the last minute to compose the Broadway Show Annie Get Your Gun after Jerome Kern died.  He immediately accepted and within the month Irving Berlin had written the show's entire score including the songs "The Girl That I Marry", "They Say It's Wonderful", and the immortal "There's No Business Like Show Business".

In 1914 Irving Berlin became a founding member of ASCAP  (American Society of Composers, Authors, and Publishers), and championed many music copyright causes during his career.  Indeed, in 1961 he sued Mad Magazine for copyright infringement in publishing a parody of his song “Blue Skies”.  The case went all the way to the United States Supreme Court which let stand the lower court ruling in favor of Mad Magazine. This resulted in a principle carved out of Intellectual Property law, known as "The Mad Magazine Exception",  establishing parody as protected free speech.

On the occasion of his 100th birthday in 1988, a gala birthday bash involving the major entertainers of the day celebrated Irving Berlin's century of life.  On the day following his death in 1989, a crowd of thousands sang Berlin's "God Bless America" at a  luncheon in Boston.  On the evening following his death, the marquee lights of all Broadway playhouses were dimmed before curtain time in his memory.