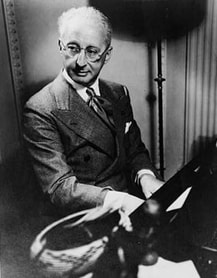 Jerome Kern
Jerome Kern (1885-1945) was an American composer whose songs appear in an amazing 57 musicals for the stage and screen.  Kern had two main periods in his musically rich life: on Broadway composing for stage musicals from 1904–1933 and in Hollywood composing for motion pictures from 1934-1945.  He collaborated with many lyricists including Oscar Hammerstein II, P.G. Wodehouse, Otto Harbach, Dorothy Fields, Buddy DeSylva, Jimmy McHugh, Johnny Mercer, Ira Gershwin, E.Y. Harburgh, and Leo Robins to name a few.  With the production of the 1927 musical Show Boat, Jerome Kern and Oscar Hammerstein II have been credited with inventing the form of American musicals known today.  During his Hollywood period, Kern received 8 Academy Award nominations for best song/score and won twice.  In 1985, President Ronald Reagan declared what would have been Kern's 100th birthday, January 27, 1985, as National Jerome Kern day.

Jerome Kern was born in New York City and began composing songs in high school. He subsequently studied piano, harmony and composition at the New York College of Music as well as at Heidelberg, Germany’s famous conservatory.   During the years from 1905-1915 Kern composed a large number of songs, worked as a piano player for T.B Harms & Co,  as a song-plugger for John Wanamaker’s Department Store, and as a rehearsal pianist for Broadway shows where he would get his own compositions “interpolated” into the productions.  He developed a rich composing technique in which he would use quite advanced chord changes for his very melodic compositions.  In 1915 Jerome Kern, P.G. Wodehouse, and Guy Bolton produced a series of new-style musicals known as “The Princess Theater Shows”.  These shows were fresh and startlingly new in sound and form, driven by the small size of the Princess Theater.   This collaboration propelled Kern into the Broadway big time.  Indeed, 1917 and 1918 produced five Kern musicals, and the 1920 hit Sally produced Kern’s first song hit, “Look For The Silver Lining” written with Buddy DeSylva.

Jerome Kern began collaborating with Oscar Hammerstein II in 1925, composing for his first hit show Sunny.  In 1926, Kern happened to read Edna Ferber’s new novel called Show Boat, a story about life on that disappearing American entertainment venue.  Kern, hoping to adapt it as a musical, met with Ferber during the intermission of Kern's latest musical, Criss Cross. After being assured by Kern that he did not want to adapt it as the typical frivolous "girlie" show of the 1920s, Ferber granted him and Oscar Hammerstein II the rights to set her novel to music.  The premiere of Show Boat on Broadway in 1927 was a watershed moment in the history of American musicals. “Compared to the trivial and unrealistic operettas, light musical comedies and Follies-type musical revues that defined Broadway in the 1890s and early 20th century, Show Boat was a radical departure in musical storytelling, marrying spectacle with seriousness.  Here we come to a completely new genre – the musical play as distinguished from musical comedy. Now... the play was the thing, and everything else was subservient to that play. Now... came complete integration of song, humor and production numbers into a single and inextricable artistic entity.”  Standards arising from the play included the songs “Ol’ Man River”, and “Make Believe”. After Show Boat, Kern spent seven more years on Broadway, composing for about one Broadway show a year and producing hit songs including “The Song Is You”.

After moving to Hollywood in 1934, Kern composed almost exclusively for motion pictures making one trip back to Broadway in 1939 to work on the stage musical Very Warm For May with Hammerstein.  This Hollywood period produced most of his song standards including "Yesterdays", “Smoke Gets In Your Eyes”. “All The Things You Are”,  "The Way You Look Tonight", “A Fine Romance”, “Long Ago (And Far Away)” and the jazz standard "Up With the Lark".

In 1945 Jerome Kern was again called back to Broadway by producers Rodgers and Hammerstein to compose the songs for a promising Broadway Musical called Annie Get Your Gun.  While walking the streets of New York he collapsed, dying shortly thereafter at the young age of 60.  His popular songs, all from musicals, have become American song standards and are performed routinely today.