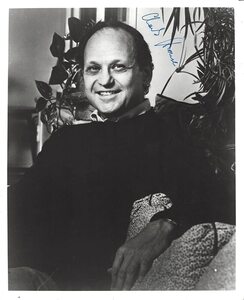 Charles Strouse
Charles Strouse is an American composer who composed 22 stage musicals including the 1977 Broadway production,  Annie, which has been called one of the top Broadway Shows of all time.  Strouse has won numerous Emmy, Tony, and Grammy Awards including Best Musical/Score Tonys for the Broadway Musicals Bye Bye Birdie, Applause, and Annie.  In 1977, he founded the ASCAP Musical Theatre New York Workshop through which many young composers and lyricists have found a forum for their work.  He was inducted into the Songwriter’s Hall of Fame in 1985, received the ASCAP Richard Rodgers Award in 1999, inducted into the Theater Hall of Fame in 2001, received the Dramatists’ Guild Frederick Loewe Award in 2005, and the Library of Congress Music Division Honors in 2008.
​
Charles Strouse was born in New York City on June 7, 1928.  He began piano lessons at the age of 10 and received a Bachelor of Music from the University of Rochester, NY Eastman School of Music at the age of 19.  He studied under Aaron Copland at Tanglewood, MA, Nadia Boulanger in Paris, France, and David Diamond in New York City.  Early on he played piano for rehearsals, auditions, dance classes, and nightclubs, toured the South with a number of performers, and composed music for 20th Century Fox in New York City.

In the mid-1950s Strouse composed regularly at the Green Mansions summer resort in the Adirondacks, NY, and teamed with lyricist Fred Tobias to publish the top pop hit, “Born Too Late”.  He also began collaborating with his lifelong lyricist friend Lee Adams, and in 1958 he and Adams were chosen to compose the score for a new musical about United States teenagers.  The show, ultimately titled Bye Bye Birdie, opened on Broadway in 1960 and won 6 Tony Awards including Best Musical.  It produced the notable songs “A Lot of Livin’ To Do”, “One Boy”, and “Put On A Happy Face”.

Charles Strouse also composed songs for film and television, and his versatility extended into orchestral works, chamber music, piano concertos, and opera.  The notable films included Bonnie and Clyde 1967, The Night They Raided Minsky’s 1968, and All Dogs Go to Heaven 1989.  The television productions include Lyle, Lyle, Crocodile 1987 and All In The Family 1968 for which he composed the lead song “Those Were The Days” with lyricist Lee Adams.

In 2021 Charles Strouse lives in New York City and continues to compose music.  His 2008 autobiography Put On A Happy Face tells his life story and gives a complete bibliography of his musical works.  To this day his masterpiece, Annie, continues its revivals in musical theaters around the world.